AdvertisementsWhen our Shimano 105 group quite some time ago, it breathed new life into an aging (but still darn fine!) Trek 5200 carbon road bike. Now, after years of use for training, charity rides, cyclocross and just spinning on country roads, we’re pleased to say it’s still functioning just fine and looks as good as ever.The Lodestar Black colorway introduced with the 2011 group update goes a long way in keeping the 105 group visually relevant against the recent updates to. That goes a long way in keeping us cyclists happy with a purchase when there’s so much shiny and new hitting the airwaves every hour, so we can’t say enough good things about the group’s aesthetics.Performance wise, it’s still shifting smooth, though it highlights the improvements Shimano’s made with it’s top end cables and housing since. 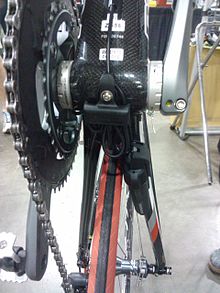 If you recall the smooth shifting of older groups with the external shift routing popping out the sides of the hoods, the new stuff is pretty darn close to that. These run out the back of the shifter/lever and under the bar tape, which adds noticeable and unfortunate drag to the system. It’s not hard to push them, but it’s not as smooth as their latest and greatest either. The actual shifting performance, though, is still crisp and accurate.Read on for the full reviewShimano’s Hollowtech II cranksets have proven plenty stiff while remaining within spitting distance in weight to mainstream carbon cranks. The functional change with this group was a bit wider spacing between the chainrings to improve clearance when cross chaining. For a group that’s likely to get spec’d on more entry level and “enthusiast” bikes, that’s a good thing.

For more performance oriented cyclists that shift the front chainring more frequently, the good news is it shifts up and down the rings quickly and easily, even under hard effort.Sure, the new Dura-Ace’s extended arm adds a good bit of leverage, but this one works just fine, too. In fact, our hunch is a good set of premium cables (Shimano’s are good, but we’re pretty excited about ) would make these feel better than new.The combination of matte and gloss black across the cranks and rear derailleur give it the appearance of a more premium group.Ergonomics are good, the hoods haven’t worn excessively and everything’s still tight and tidy.Despite being our only consistent complaint about Shimano’s levers, the exposed internals haven’t suffered from any debilitating contamination. We’ve also had a Raleigh cyclocross bike in for long term review with a 105 group that’s seen two seasons of training abuse, a few races and quite a few days (months, really) being put away dirty. Even so, things are still shifting just fine.The dual-pivot brake design provides plenty of power and modulation. They haven’t developed any play in the pivots – they feel as good now as the day they were installed.The pedals look a little worse for the wear, but still function flawlessly. We have swapped in other pedals periodically, but these end up back on the bike between testing other products.With a group reaching this age and all of it’s premium siblings having just received complete revamps, it’s hard to imagine 105 isn’t next in line. And it’s hard to imagine it won’t also add a cog to become the next 11-speed group.

Shimano’s groups just continue to get more refined, with smoother shifting and better braking at almost every update. There’s no rumor or official word about a new 105 group that we’ve heard, though, so if you’re in the market for a mid-tier group with upper tier performance that stands the test of time (or a bike spec’d as such), Shimano 105 comes highly recommended.

Regarding the Trek 5200.I still ride my Trek 5200 (2003) and it has more than 50 000 miles.I still have the original bontrager race-lite wheelset (Changed bearings and freehub).I still have the original Ultegra 6500 Groupset (mainy chains, cassettes, cables and chainrings later).Changed saddle 2 times (I’m due for another one).By todays standards it’s far from being the lightest, stiffest, or vertically compliant frameset.But it still brings a smile when I ride it.I tend to think that we put too much emphasis on the latest and greatest equipment. What ever version/age of the group.

I’ve an old Bianchi Limited that’s gone through many visions. Basic 7 by 2 with drop bars to a fixed gear and back, including a single 46 upfront 7-speed with straight bars along the way. Except for the fixie they’ve all had 105 drive trains. Fixing to build an EPX 203SL (2003) carbon frame with the new 105 from the ePay parts bin. Just havin’ some winter fun.Ride strong, live long!JLPS. It’s not its wording that matters. I read jibberish quite well thank you.