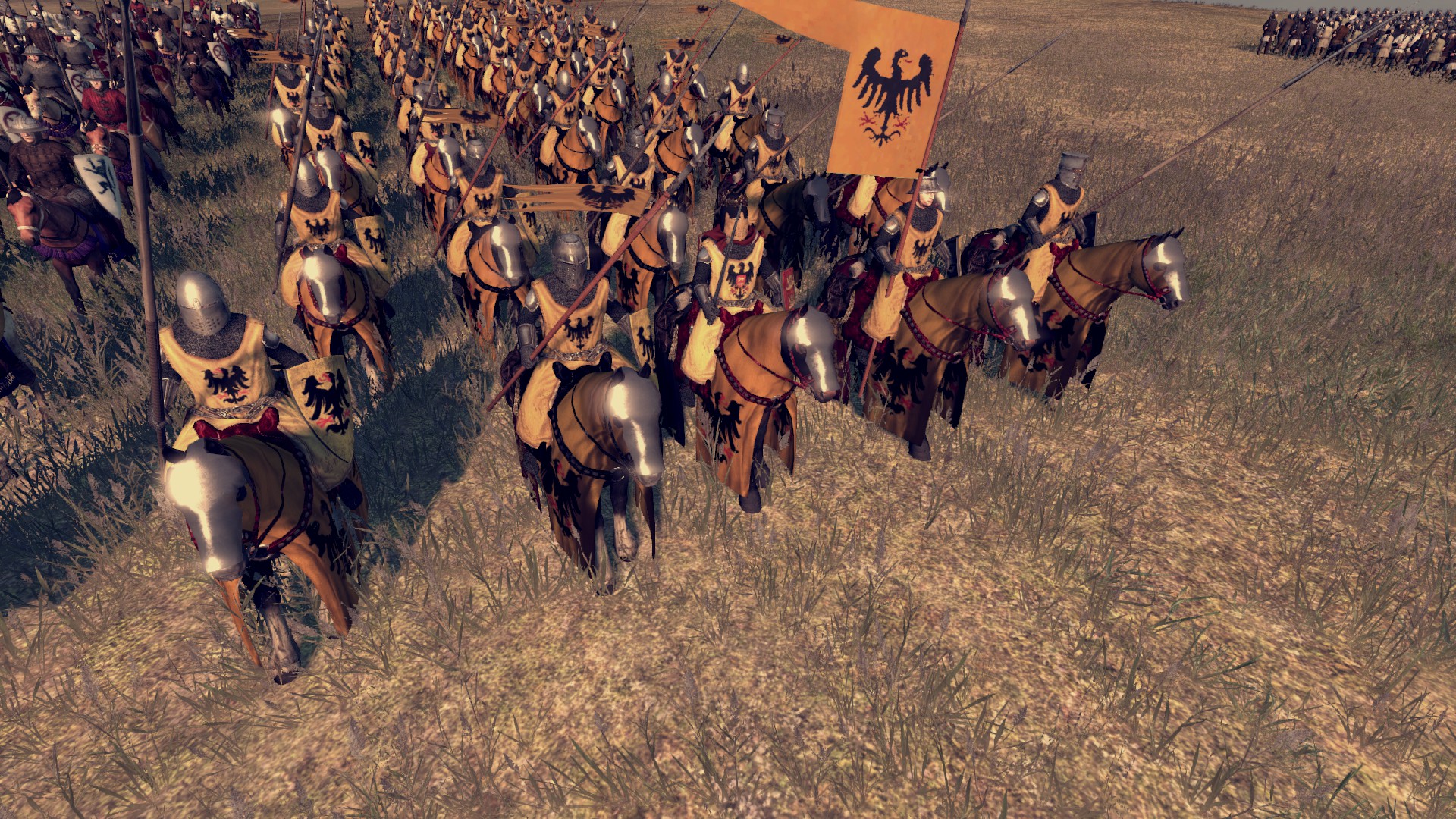 By Review Date: March 4, 2012 I will break down this review into four parts:(It will be quite a lengthy review, just a heads up, but I believe that this will be enough for most to make a decision for purchase)1) Introduction/Snappy review2) Turn-Based Gameplay3) RTS Gameplay4) Conclusion1) Medieval II: Total War (hitherto referred to as MTW2) is a game which allows the play to take command of various European powers circa 1080 to about 1500. These powers include England, France, Holy Roman Empire (ironically it was neither Holy, nor Roman, nor an Empire), Spain, Portugal, Denmark, Poland, Hungary, Russia, Venice, Milan, Sicily, Byzantine Empire, Turkey, Moors and Egypt. The unplayable factions are the Papal States, the Mongols, the Timurids (basically Mongol invasion with Elephants which comes later in the game), and the Aztecs. MTW2 is a refreshing blend of turn-based strategy and real-time battles to form an empire midst the chaos of the Middle Ages. In the turn-based portion, one can conduct diplomacy, move armies, govern cities, build forts and watchtowers, and prepare for war. When two armies meet, the player has the ability to control the troop movements to achieve victory, with corpses littering the battlefield, only reinforcing the bloody path of the player to victory.

It is very enjoyable to watch two armies face. This is not a game which can be played in one sitting, but rather, needs constant attention over the course of days, if not weeks.

Some bugs plague the game, but they do not detract too severely from the game, which fully deserves its 9/102) In MTW2, the turn-based gameplay is where the core of the game takes place. Perhaps as a first step, one must cover cities vs. A city allows trade to flourish, and these are the economic centers of one's realm. They bring in large numbers of revenue, and cap at around 7000 (this was reached by a fully upgraded, so to speak, Antioch). The downside is the fact that they are not as easy to defend as castles, as there is only one layer of defenses, as well as the best trained units cannot be bought here, with the exception of some beginning knight units (I am not considering Mailed Knights and Feudal Knights as 'Knight' units – that honor goes to units like Polish Guard or Knights, Chivalric Knights, English Knights, etc., which are vastly superior to Mailed and Feudal Knights.).

These beginning 'knights' units such as the French Gendrames and Polish and Hungarian Hussars are valuable troops, and are only trained in the cities. Losing a city means decreased revenue and potential bankruptcy due to lack of funds. Castles, on the other hand, do not bring in as much revenue and cap at around 2500. 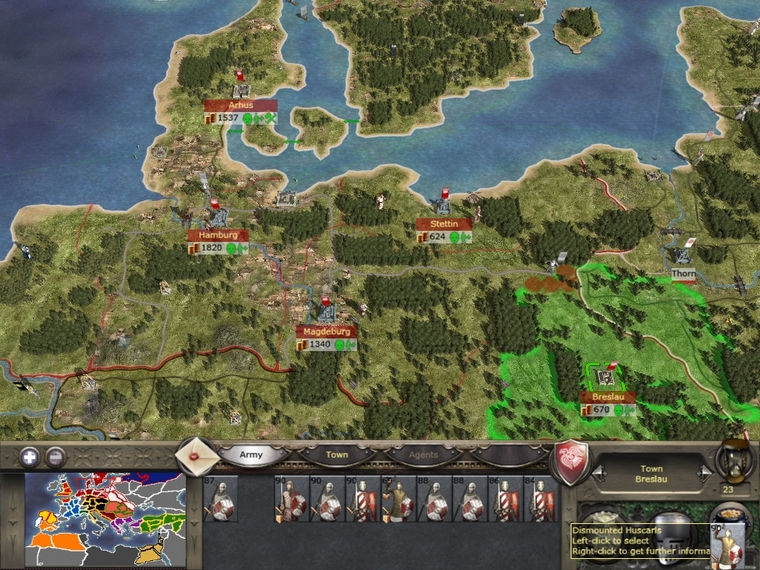 Here, one can hire the best-trained units available to each power, and are much easier to defend than cities, especially citadels, which allows for a three-layer defense. Losing a castle means slightly decreased revenue, but the worst is decreased military capability, which can hurt in the long run. This is an enjoyable change, as it brings a sort of a dualism into the map – no longer is one simply training units in strongholds or only in cities, but in both, each with its own distinct advantages.

This is a welcome addition to the series. Secondly, agents will be covered. There are six types of agents, Diplomats, Princesses, Spies, Assassins, Merchants, and Priests/Bishops/Cardinals/Imams. Diplomats let the player engage in diplomatic relations with other powers to forge alliances, trade rights, marriages, seek help in a war, peace treaties, map information, payment, tributes, etc. In general, the diplomacy system is rather sound, but there are some rather grievous errors. Upon enacting diplomacy, I decided to have an alliance and trade rights, and I was going to pay 1500 to sweeten the deal. Men of war map editor. They declined, and decided to pay ME 1500.

However nice it is to get more money, should not they accept when I was the one paying? The alliance system is also rather misguided. I enacted an alliance with a country much weaker than me (I was waging war elsewhere), and three turns later, they break the treaty by blocking a PORT. Let us just say that they did not last long. I find this to detract from the overall feel of the game – why is it that an enemy would do this, knowing that there was no chance of victory? It is a problem that has plagued the series, and I am unhappy that it still has not been fixed, so.5 here. This is probably among the greatest of my contentions against the game.

Princesses can also engage in diplomatic relations, but can also marry enemy generals, thereby bringing the generals to one's side. The negative is that fact that your princesses do not really show up all that often, so it is rather rare to experience such enacted marriages. Spies spy, assassins assassinate enemy generals, cardinals, or if necessary, the pope himself. Priests and Imams convert populations to their respective religions, thereby decreasing or increasing public content. Merchants allow for increased revenue, but there are not many places in which it is actually very helpful (slaves around Kiev and Caffa, Mines around Vienna, Ivory and Gold in Timbuktu – by far the best place for Merchants to expand, gold and ivory in Dongola, and the silk around Constantinople and Nicaea; other than that, nothing else is really worth it). The agents allow for various things to happen, and I am very happy with how things play out – large check here. City management is OK, but after getting the largest cities, squalor levels become rather unbearable, making one wish for the Black Plague (and it does come, and kills not only citizens, but your agents and generals). 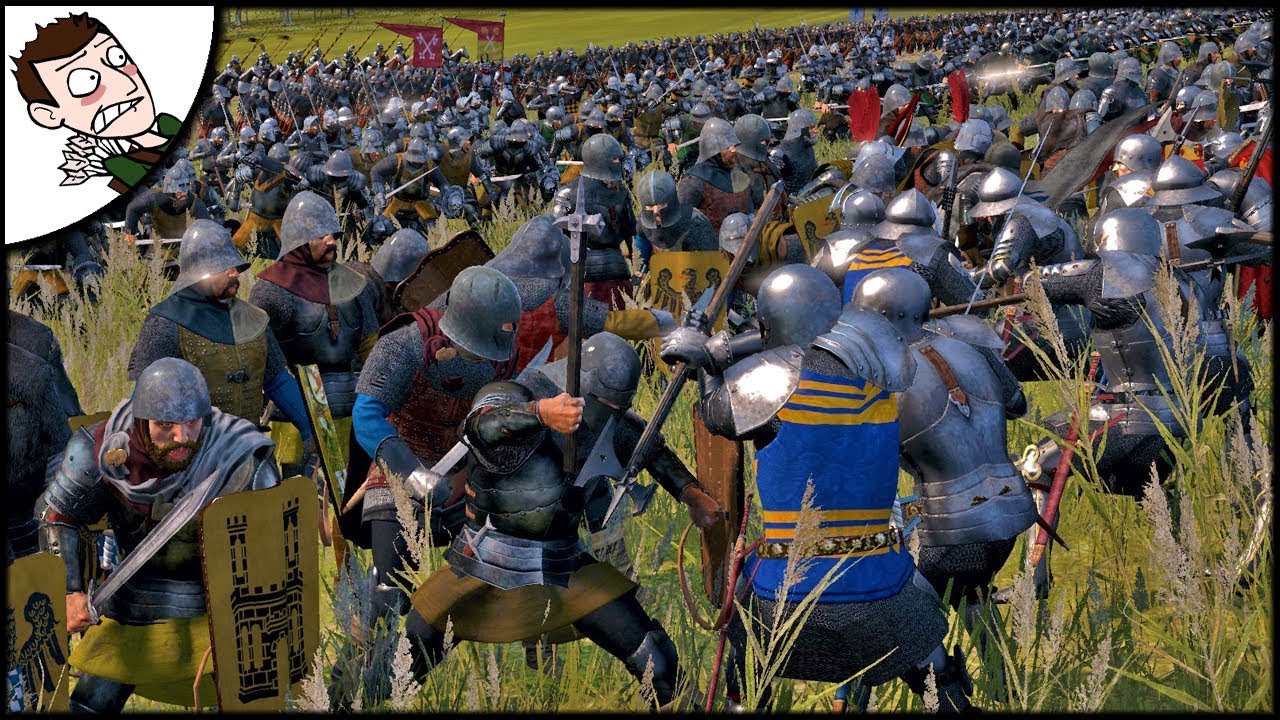 Adopting new generals is rather annoying, because they either spawn in your capital or with a faction leader or heir and then take a long time to send to the frontlines. I don't have too much of a problem with this because I can't find an alternative – it would seem silly to adopt someone and then choose where to have him spawn – that would destroy the realism. Moving armies is fine and the ability to build watchtowers and forts is really nice. I think that that is enough here.3) When two armies meet, the player has the ability to auto-resolve, fight on the battle map, or withdraw.

Assuming one fights one the battle map, one first has to set up troops in wanted locations. While this is usually a painless process, glitches exist; mainly the fact that after dragging a formation, and seeing the proper formation and letting go of the mouse to have the formation there, it never materializes, even though there is nothing blocking the path there. Annoying, but manageable. The AI fights as well as it can, but do not expect much of a challenge after about 5 hours of gameplay – then, one can take on very large armies and come out victorious with small losses. I routinely fight about 2000 on 2000 on very hard, usually losing less than 400 troops, while the other army was fully vanquished.

The corpse-strewn battlefield is a nice touch – a reminder of the player's bloody path to global domination. The soldiers fight, and it is breathtaking to watch them stab, hack, and parry incoming blows, and absolutely disheartening when your General gets killed by a luck axe from a woodsmen (yes I had that happen – charged head-on, and completely destroyed the enemy unit, killing ¾, while myself losing one – my general ). This is a game from 2006, but I wish that it was slightly more realistic up-close. While they do fight, there are times where there seems to be no contact, but a unit recoils as if struck.

Also, the enemy AI sometimes stands still while being hacked by enemy troops, rather than fighting. These are not major contentions, but they detract enough from the gameplay to warrant a loss of.5. As a side-note, I am not happy with the 'historical battles.' The numbers are rather erroneous, and even the parties taken in them are flawed (e.g. Battle of Grunewald / First Battle of Tannenberg saw allied Poles and Lithuanians against the Teutonic Knights – in the game, it is just the Poles vs.

The Holy Roman Empire). Since I don't play these (a)historical battles, I did not bother meriting a loss of points.4) Overall, this is a highly recommended game for anyone with an interest in Medieval warfare and global domination.